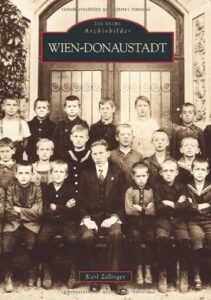 „Vienna-Donaustadt is the youngest, but largest Viennese district and one of the most important city expansion zones. Where you could still see vegetable and grain fields 100 years ago, there are now modern residential and office buildings. In no other district you find tradition and modernity so close to each other. With the Old Danube and the Danube Island, the district also offers one of the biggest European recreational areas in the middle of a metropolis.

The historian and certified Austria Guide Karl Zillinger documents, with about 200 mostly unpublished photographs, aerial images, greeting cards and plans from the archives of the district museum in Donaustadt, the daily lives of the inhabitants of the 22nd district as well as the fascinating changes which Donaustadt has undergone in the last 100 years.”

This website uses cookies to improve your experience while you navigate through the website. Out of these, the cookies that are categorized as necessary are stored on your browser as they are essential for the working of basic functionalities of the website. We also use third-party cookies that help us analyze and understand how you use this website. These cookies will be stored in your browser only with your consent. You also have the option to opt-out of these cookies. But opting out of some of these cookies may affect your browsing experience.
Necessary immer aktiv
Necessary cookies are absolutely essential for the website to function properly. This category only includes cookies that ensures basic functionalities and security features of the website. These cookies do not store any personal information.
Non-necessary
Any cookies that may not be particularly necessary for the website to function and is used specifically to collect user personal data via analytics, ads, other embedded contents are termed as non-necessary cookies. It is mandatory to procure user consent prior to running these cookies on your website.
SPEICHERN UND AKZEPTIEREN